Carved or cement composite statues deteriorate largely under the impact of the environment. The more contaminated the environment the more severe the deterioration. Contaminants penetrate into the structure in liquid and gaseous form through naturally existing porosity. It is known that many of the building materials commonly used in carving or otherwise creating statuary and monuments contain chemically reactive components which are often the bonds tying together more inert particles such as quartz sand, etc.. Airborne pollution as well as pollution contaminated liquids tend to interact and dissolve and erode these bonds leading to failure of the building materials. 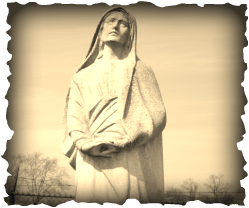 Created from workable mostly cementitious materials composite monuments and statues deteriorate in ways similar to other concrete structures. Cement porosity allows water and contaminants to penetrate and destroy the bonds of pozzolanic matrix. These bonds are most commonly attacked by the acidic materials formed in the environment where airborne and other forms of pollution are present. These gaseous or in solution contaminants create a chemically deleterious effect allowing more inert particles of aggregate to come away from the surface with water and wind creating a "weathering" (illustration) effect which can also be described as the loss of surface or surface integrity.

Often composite structures are created with the use of reinforcement where wire or other steel components are added/encased within the statue for support. These metal components are susceptible to corrosion (illustration) promoted by the same ingress of water and pollution via porosity. 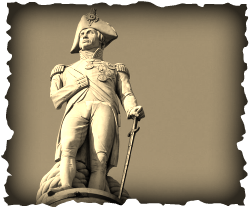 Carved stone statues and other monuments and historically significant artifacts are generally considered more durable than newer composite structures. However under the influence of airborne pollution and deleterious effects of water penetration they deteriorate in ways similar to those of composites. With pollution present various chemical (often acidic) compounds attack and destroy chemically chemical bonds and other reactive sites present in stone allowing more inert aspects of the structure to weather away. Continued exposure to the environment with omnipresent (often airborne) pollution destroys the surface of the stone by continuously reacting  with the stone surface. Different types of stone will deteriorate (illustration) at different rates - sediment stone, sandstone, limestone, marble etc. all contain reactive to one degree or another chemical sites.

With the increase in air pollution accelerating the deterioration, whenever possible valuable artifacts and historical structures of significance are removed from the environment and placed into climate controlled areas.

Structures that are not practical to remove can be preserved by protecting from attack by pollutants. As the deterioration process is chemical in nature chemical means can be deployed to reduce structure surface reactivity, increase surface hardness/durability/weatherability, and reduce permeability.

General guidelines for the use of SURTREAT materials is described in the Project Performance section of this website.

SURTREAT is NOT a sealant in the conventional sense of the word. SURTREAT materials are designed to penetrate completely and do not exist on the surface of the treated substrates. They do not alter structures' appearance. By the use of SURTREAT structures are preserved in their "original" condition. Monument alteration or repair is not a part of the SURTREAT process and should be contracted for separately.

While SURTREAT materials disappear completely from the treated surface without residue, because of the variety of existing substrate and their varying condition it is prudent to always conduct a trial application to see that there are no anomalies associated with each particular situation.